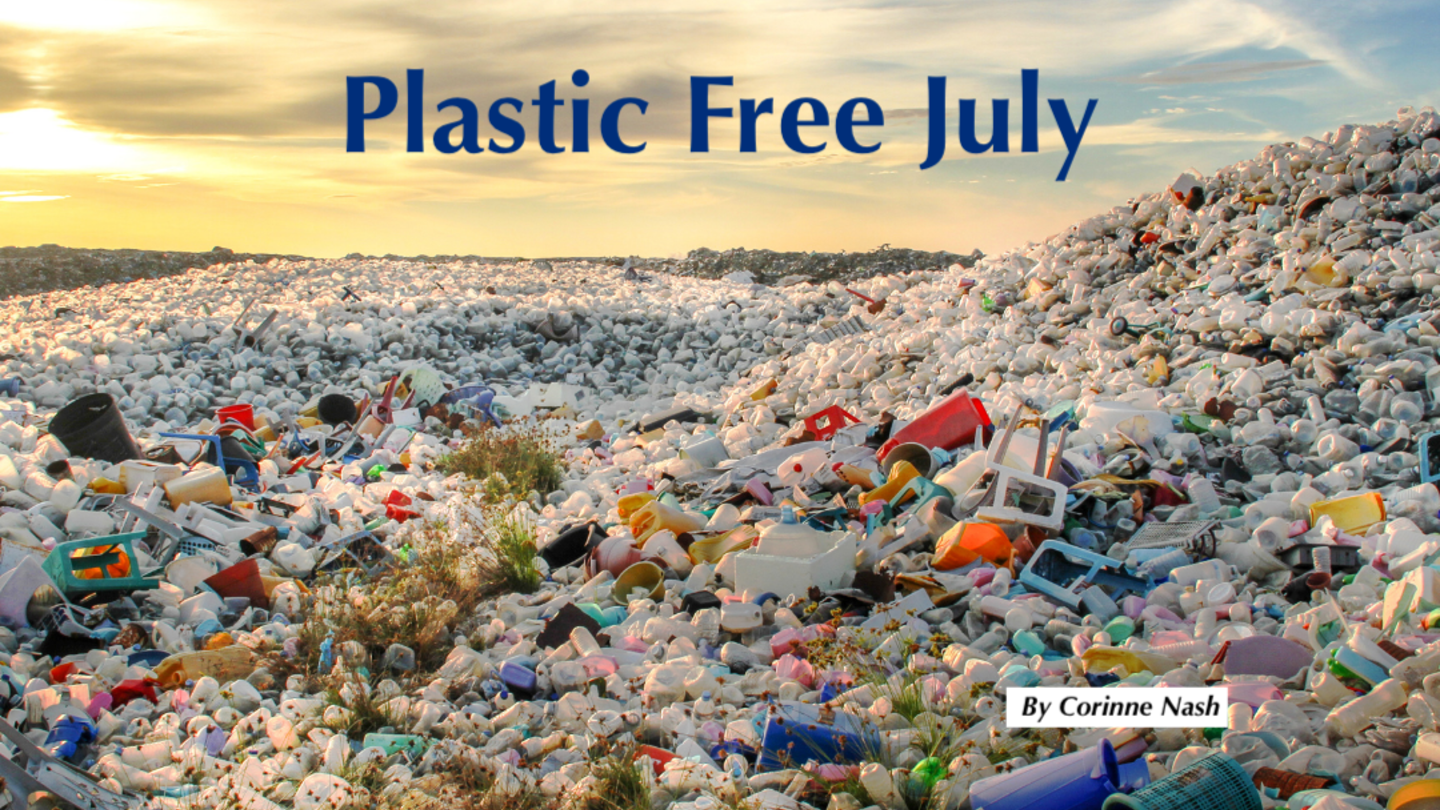 Plastic Free July(1) is a campaign designed to unite global efforts to decrease both plastic use and plastic waste. It has inspired over 100 million people in 190 countries to make a difference by taking small personal actions.

The impact of plastics on the environment is far reaching. There are the issues of inappropriate dumping, fossil fuels being used to make plastic, nanoparticles ending up in our food - such as fish and vegetables - with largely unknown effects on future health(2) and the growing issue of where to safely dump non-recyclable plastics into landfill.

The University of Newcastle produced a report in 2019, commissioned by the World Wildlife Fund, in which they estimate that Australians ingest the equivalent of a credit card sized piece of plastic every month.(3)

Plastic is a non-renewable resource, it is extremely resistant to degradation yet breaks down easily to fragmented debris. Persistent organic pollutants (POP’s), such as pesticides and industrial by-products, adhere readily to plastic thus sticking around for a long time. Many marine birds, fish, reptiles and mammals are injured or killed by plastic ingestion or entanglement each year.

The Global Plastics Outlook(4), released in February this year by the Organisation for Economic Co-operation and Development (OECD), estimates that plastic consumption has quadrupled in the last 30 years, driven by growth in emerging markets. Global plastics production doubled to 460 million tonnes from 2000 to 2019. Plastics are responsible for 3.4% of global greenhouse gas emissions.

To make matters worse, global plastic waste generation more than doubled between 2000 and 2019 to 353 million tonnes. Nearly two-thirds of plastic waste comes from plastics with lifetimes of less than five years. And it’s not all packaging – 11% of that came from clothing and textiles.

15% of plastic waste is collected but only 9% is recycled (the rest is disposed of as residues). 19% is incinerated. 50% goes into landfill and 22% of waste is not captured by any of those systems but is dumped illegally, burned in open pits, or ends up in the ocean, rivers or is abandoned on land, most commonly in poorer countries.

However, we cannot ignore that about half of all plastic waste comes from OECD countries. (Plastic waste generated annually per person varies from 221 kg in the United States to 69 kg, on average, for Japan and Korea). Australians produce approximately 101kg of plastic per capita annually.(5)

Clearly, there is a massive problem that demands a global response. Unilateral action is laudable but ineffective as plastics respect no borders given that they are so omnipresent in life and move around the globe in ocean currents.

How does Fair Trade fit in to all this?

One of the ten principles of the World Fair Trade Organisation (WFTO) to which Fair Trade businesses must adhere is Respect for the Environment.(6) Fair Trade enterprises source sustainable raw materials locally wherever possible, use biodegradable or easily recyclable packaging, minimise the use of pesticides for agricultural products, ship by sea wherever possible and minimise their contribution to waste streams.

Knowing that something that you buy is Fair Trade certified means that you can be confident that you are acting in an environmentally responsible manner with your purchase.

Australia has a Plastic Plan.

After a 2010 National Plastics Summit involving industry, government and community representatives, a plan was formulated to tackle plastic waste.(7)

The plan has five strategies:

A big move this year has been that from 1 July, only waste plastics that have been sorted into single resin or polymer type and further processed, e.g. flaked or pelletised, or processed with other materials into processed engineered fuel, can be exported. The Department of Environment has approved 48 waste companies with licenses to export. These new regulations are designed to increase dealing with waste plastics on home soil to ensure that the target of 70% of plastic waste being recycled or composted by 2025 is achieved.(9)

Of course, it would be better if we all used less plastic in the first place! After all, just one hundred years ago the use of plastic was rare. It must be acknowledged that there are many valuable applications for plastics. But the environmental degradation that they are causing at the end of their lives is so far reaching that not only should we as individuals start to change our habits and put up with some slight inconveniences, but industry must also seek innovative solutions rather than simply moving to reuse and recycle plastic.

How you can help?

What actions will you take this Plastic Free July?

These could include taking along your own reusable coffee cup (without the plasticised lining!)  when buying coffee out, replacing plastic toothbrushes with bamboo ones, buying food at a bulk food store in paper bags or refillable jars, helping to collect plastic waste on a roadside, in a park or on the beach, or organising a guest speaker on reducing plastic usage at work. Such actions may seem small and inconsequential, but if over 100 million people are doing them …

Plastic Free July(1) has a wealth of resources and ideas on its website to get you started, and July is a perfect time to introduce some new habits to your workplace, home, school, community organisation or church.